WASHINGTON — The Biden White House on Wednesday finally acknowledged that teachers don’t need to be vaccinated before returning to the classroom, falling in line with new Centers for Disease Control and Prevention guidelines on school reopenings.

But at a Wednesday briefing, Press Secretary Jen Psaki repeatedly diminished President Biden’s role in both establishing federal guidelines and pressuring the nation’s powerful teachers’ unions to get their members back into classrooms.

At her daily briefing, Psaki was asked if the president believed children could not return to classrooms five days a week without teachers receiving a jab of the vaccine.

“No, neither the president nor the vice president believe that it is a requirement,” Psaki said, endorsing the new guidelines after previously dismissing them.

“The CDC guidelines included a range of mitigation steps, including vaccinations, as recommendations,” she said.

“Now, at the same time, the president and the vice president both believe that teachers should be prioritized and as you all know, that’s up to states to determine.”

The new commander-in-chief has been under growing pressure to use his influence to reopen schools, while his administration is under fire for repeatedly changing their goal for how many days students could return.

Concerns are mounting about the impacts of student isolation caused by an absence of in-person learning, such as in New York, where three city public school students have killed themselves in the last three weeks.

The pro-union president has refrained from squashing dissent from teachers’ unions in the country’s largest cities who have refused to return to work out of fear of contracting COVID-19, despite new data which found a limited spread of coronavirus within classrooms. 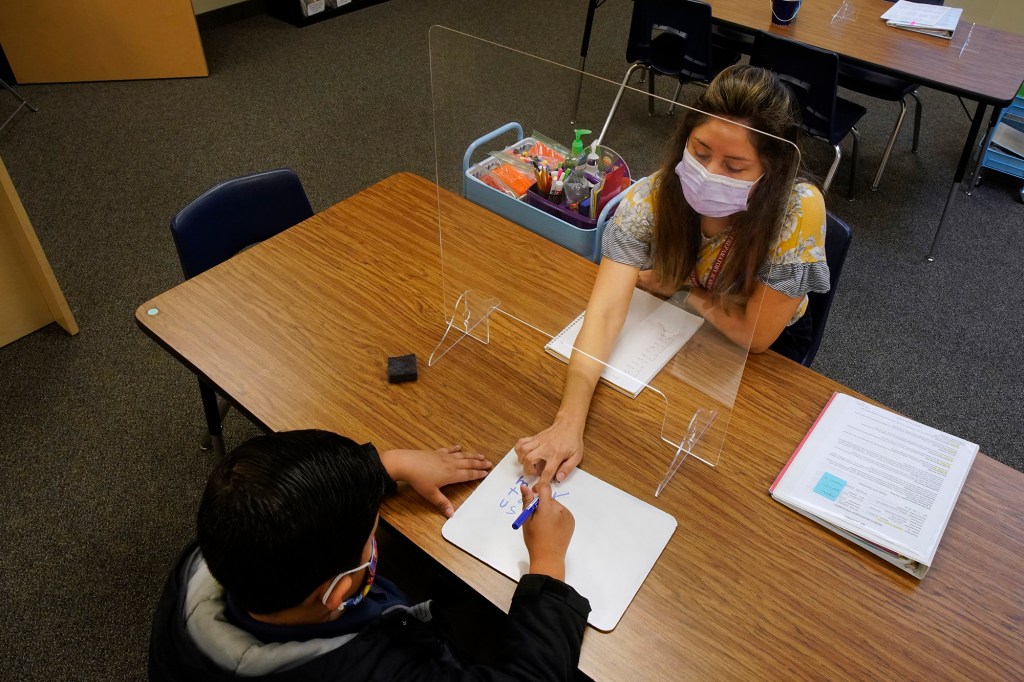 A teacher works with a student with a plexiglass shield dividing them at Freedom Preparatory Academy on February 10, 2021 in Provo, Utah. 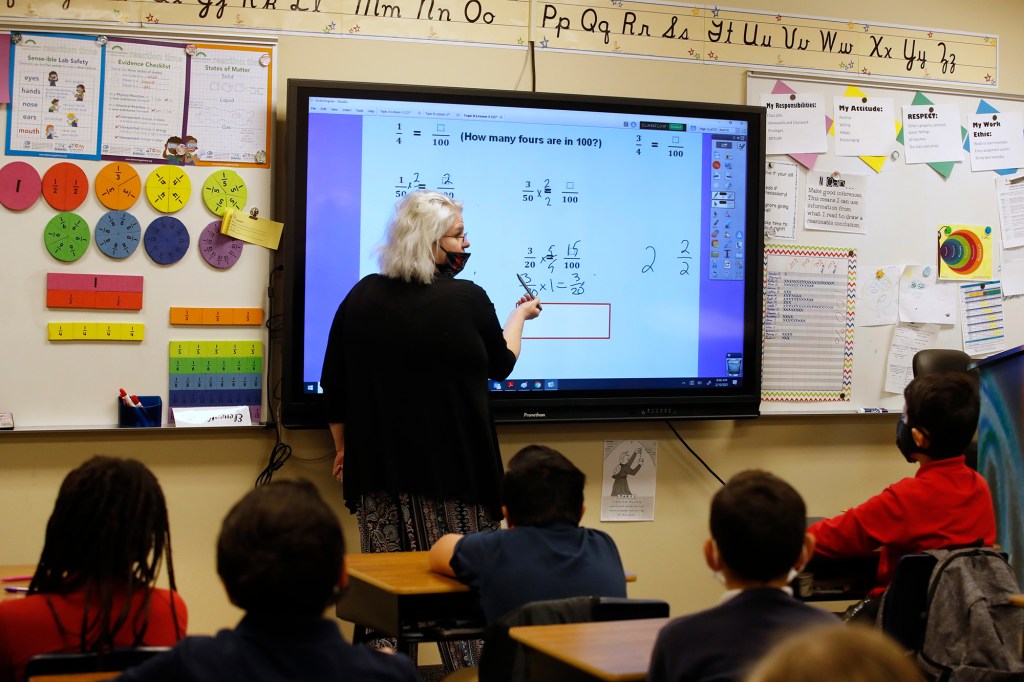 A teacher instructs students at Freedom Preparatory Academy on February 10, 2021 in Provo, Utah.

“I had three strokes. I had a heart attack. My…

During an interview earlier Wednesday, Vice President Kamala Harris repeatedly dodged questions on school reopenings and countered the CDC by insisting teachers need to be a priority for vaccination.

Dr. Anthony Fauci refuted this on Tuesday when he told CNN it was “important” for educators to receive the vaccine but not necessary to resume classes.

Psaki told reporters Wednesday that Biden and Harris wanted teachers vaccinated, but when asked what his White House was doing to ensure educators were at the front of the line, Psaki put the responsibility on states.

At a CNN town hall on Tuesday evening, Biden was asked about his shifting targets for school reopenings.

He said Psaki was wrong when she said his plan would only see half of the children back in classrooms for as little as one day per week.

“That’s not true. There was a mistake in the communication,” Biden told CNN’s Anderson Cooper when asked about the scaled-back one-day-per week goal. 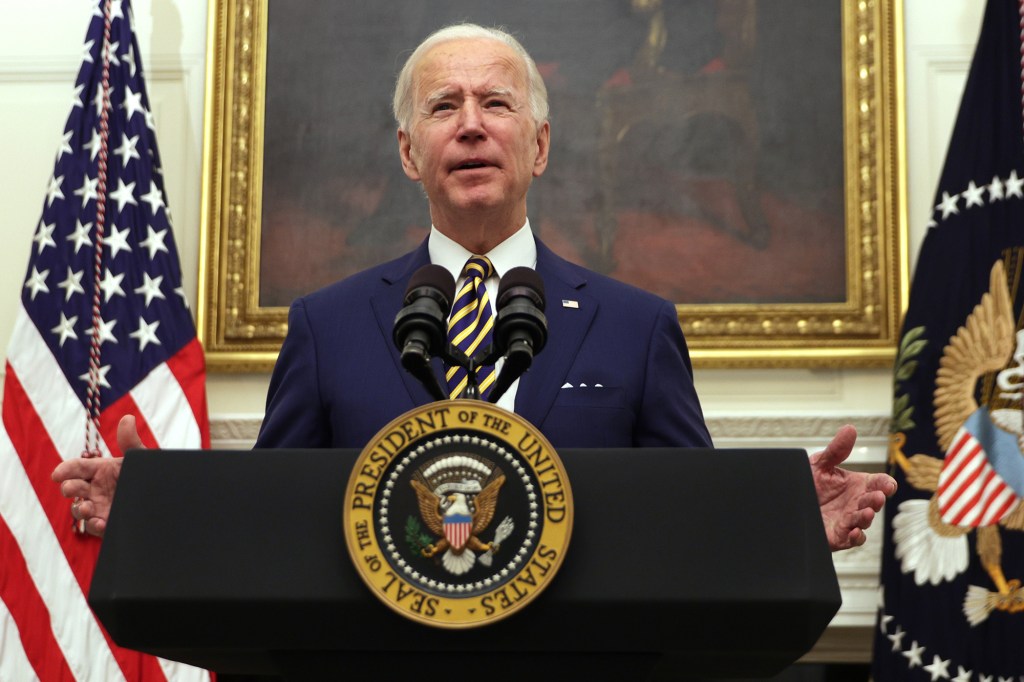 US President Joe Biden speaks during an event on economic crisis on January 22, 2021. 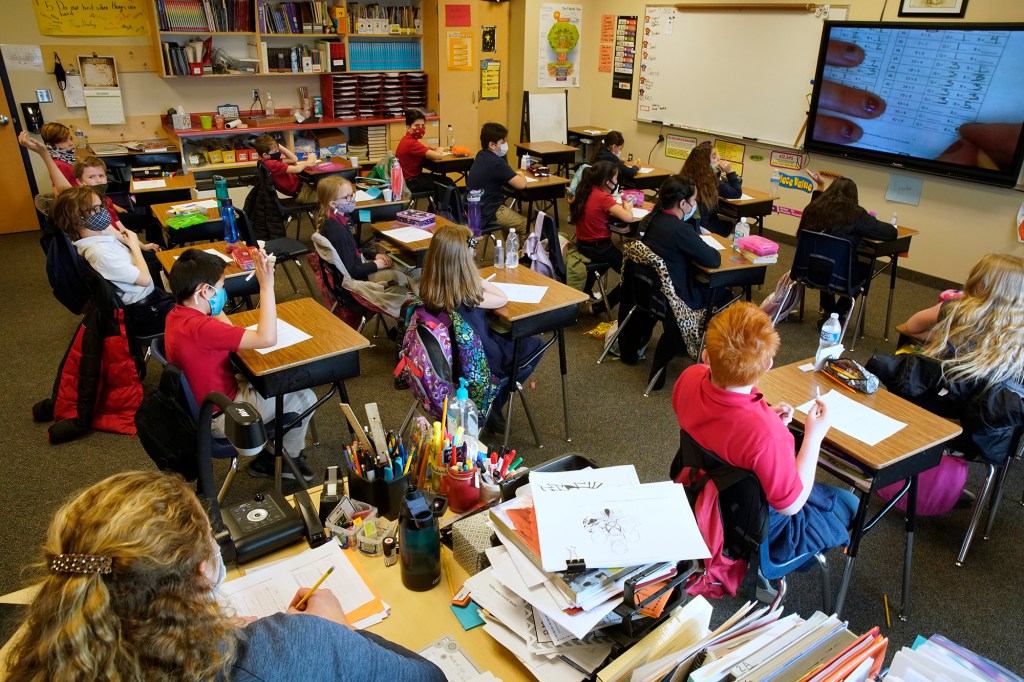 A teacher instructs students with a camera projector from her desk at Freedom Preparatory Academy on February 10, 2021 in Provo, Utah.

“I had three strokes. I had a heart attack. My…

Biden said he would be “close to” meeting his goal of reopening the majority of K-8 schools by the end of his first 100 days in office.

He also predicted there would a full summer school semester in some districts to make up for more than a year of lost learning.

On Wednesday, Psaki said that it would be up to Biden’s education secretary nominee Miguel Cardona, who is still awaiting Senate confirmation, to set reopening guidelines and said it would be up to local school districts to follow them.

She again downplayed the president’s role in reopening schools and told reporters he would instead focus on getting them the money they need to do so.

“The role the president can play is to work with Congress to get to the necessary funding. That is the role he can really play,” she said.