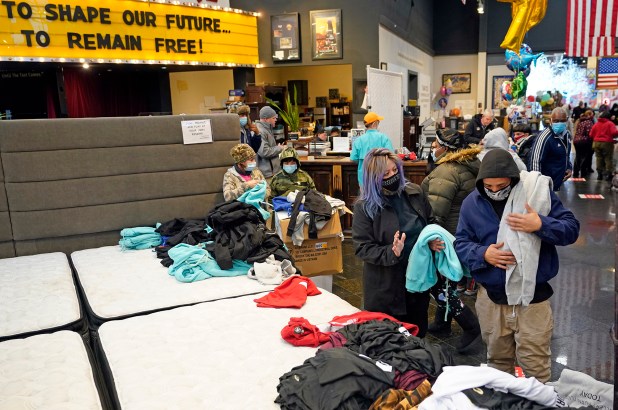 People select shirts and sweatshirts being given away at a Gallery Furniture store after the owner opened his business as a shelter for those without power at their homes Tuesday, Feb. 16, 2021.
AP Photo/David J. Phillip

A Texas furniture store has transformed into a shelter for residents without power after a historic winter storm that battered the state.

Jim “Mattress Mack” McIngvale, owner of Gallery Furniture, opened up his Houston and Richmond locations for people in need.

“We’ve got a facility that has lots of comfy furniture for you to ride out this storm,” McIngvale said in a video posted to Twitter.

The owner said the store is also providing sweatshirts and hot food.

About 20 people were seeking refuge at Gallery Furniture’s Houston location early Tuesday, with more expected throughout the day, KTRK reported.

McIngvale similarly opened up his stores for shelter following Hurricane Harvey, which dumped several feet of rain in the area.

As of Tuesday night, over three million customers were without electricity in Texas, according to the Poweroutage.us tracking site.